I’ve only been a mom for about 11 months, but I’ve learned pretty quickly which baby products are keepers and which just don’t do the job. Read on to find out which products we’ve found work best for us thus far. 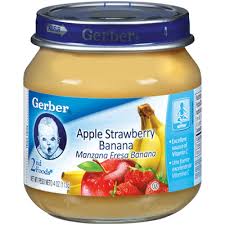 I love the Beech Nut variety of baby foods because of the unique flavor combinations they offer (example-beets, pear, and pomegranate) and also because they seem to be a little less processed than other brands. Beech Nut still packages their baby food in jars, which can be a downside if you don’t recycle, but they make great little storage containers for spices, etc. and can be washed and re-used to store homemade baby food.

Gerber offers jarred food or plastic containers that typically come 2 to a pack. I like the fact that you can buy two at a time. Gerber doesn’t vary much in what types of fruits and veggies are available and tend to stick more with single, plain jane varieties such as carrots, peas, green beans, squash, sweet potatoes, etc. The fruits are a little more varied.

I used to buy some Tippy Toes brand baby food (off brand, cheaper) but stopped buying it after tasting the carrots. Yuck. Tasted like metal or chemicals, not at all like carrots!

I have made some homemade baby food such as carrots, applesauce, zucchini, and spinach banana. I would serve homemade over store bought 100% of the time…but that’s just it…time.

When Taya was 3-4 months old, I was already finding that I was not producing enough breast milk for the amount she was drinking. I could pump 2, 4 oz. bottles in the AM at work and 1, 4 oz. bottle in the afternoon on my break. She was starting to drink 6 oz. bottles every 2 hours at this time. I had never heard of mixing formula with breast milk, but I learned of some other mothers that were doing that at the daycare. It made sense to me, so I tried it. I mixed 2 oz. of formula with every bottle. Then she got to the point where she was drinking 8 oz bottles every 2 hours (she has always been a good eater) so I began adding 4 oz. of formula to each bottle. When Taya was 5 months old, things got crazy at work. For some reason, a bunch of staff got sick all around the same time and I was needing to fill in for them in various rooms on a moment’s notice-often when I arrived at work is when I would find out. This made pumping a little more challenging as my supervisor had to fill in for me in the classroom to maintain staff to child ratio. Normally, I’m in the office and when I was needing to pump, no one had to replace me.

Also, either my pump starting acting up (less suction, poor motor function due to a lot of use, etc.) or I was stressed and it was taking me longer to fully pump (we’re talking 45 minutes versus the previous 20-30 minutes at a time) to get the same amount. So, it just was really overwhelming and I didn’t feel like it was worth the amount of time for what little I was producing. So, I decided just to nurse at home as long as I still had a supply. That ran out pretty quickly and I was only able to keep nursing for a week or two. Then I had to go to all formula. I was so overwhelmed at work at the time that this decision was initially very easy for me to make. I wasn’t getting any work done and I felt bad that my supervisor needed to fill in for me for such a long length of time. She has plenty to do as well. She was always very understanding though and would say, “Don’t worry about me…” Well, I still felt bad and was ready for a break from the madness.

A few days later I felt like maybe I gave up too easily and wish I had stuck it out and just gotten a new pump motor to see if that would help, but my supply had already dropped significantly and I couldn’t really go back to how it was before.

I was jealous of the moms I knew that could pump enough to feed an army in such a short amount of time. Maybe I’ll have better luck next time. In the future, should we be blessed to have more children, I would like to do more research about diets that support an increase in breast milk supply and see if that may help.

It took me 2 months to figure out that the soy formula I started Taya on was not a good fit for her. While nursing, I found that if I had dairy, it seemed to affect Taya’s stomach. She would get painful gas pains and would be very fussy. So, I assumed this meant she would need to be on a non milk-based formula. Wrong.

She started getting dry skin around her knees and in the crooks of her elbows. She also spit up all. the. time. LOTS of laundry. LOTS of nasty. I would use anything within reach as a burp rag. I just assumed she was more prone to spitting up as some babies are. Nope. I did some research and learned that the dry skin patches and frequent spitting up can be signs of a formula allergy. So, one day I spent what seemed like lifetime in the baby section of the grocery store reading all the formula labels, trying to choose the one I thought would suit her best. I read that using formulas labeled “sensitive” or “gentle” contain proteins that have been mostly or completely broken down to make it easier to digest. The website mentioned that Gerber Gentle was the formula that has a make-up the closest to breast milk and was recommended for babies that may have a more sensitive stomach. Of course it costs way more than the off brand, but we gave it a try and saw a ton of improvement! Hardly any spitting up compared to when she was on the soy formula and no more tummy troubles. Success! By the way, if you’re curious to know which website I got my information from, here’s the link-super helpful, check it out! Go to: incredibleinfant.com/infant-formula/baby-formula-allergy-symptoms/.

While I was satisfied with the quality of the formula, I was not satisfied with the price. The website suggested similar versions of Gerber Gentle in an off brand if you were looking to save money. Parent’s Choice Sensitivity was said to be the most similar to Gerber Gentle, so that is what we started buying. (There is also a Parent’s Choice Gentle, but the sensitive seemed to cover my daughter’s description of being sensitive to lactose). She responded well to this formula as well and we saved money! I am looking forward to not having to spend money on formula when Taya starts drinking whole milk (which will be in a month-yay!). Unfortunately, Parent’s Choice formula is only available at Wal-Mart, being that it is a Wal-Mart off-brand. Wal-Mart is an hour away, so we stock up and usually get 3 containers when we are there. You can also order formula online, which is convenient, but adds to the cost when you consider shipping and handling. Here’s what her formula looks like-we get the JUMBO containers! Also note that according to the packaging, it is supposed to be comparable to Similac Sensitive as well.

We were given a bunch of diapers of various brands at baby showers and found that some do not stand up to leaks or blow-outs as well as others. Pampers and Huggies were our least favorite as more leaks and blow-outs seemed to occur while Taya was wearing them. We found that Luvs are super absorbent. They have a “Night-Lock” feature that locks in moisture for longer lengths of time, like at night, when your little one is sleeping (hopefully!) There have been instances where she still leaks through a Luvs diaper but it’s not very often and almost always has been overnight or on a longer car ride. We also try to get the biggest box of these when we’re at Wal-Mart. Target brand diapers are pretty nice too, just maybe slightly less absorbent, but they are a little less expensive which is nice. NEIA doesn’t have a Target, so we don’t have those in our diaper bag very often.

We have tested out a few diaper creams such as Desitin and Bordeaux’s Butt Paste, but they do not compare to Aquaphor. Desitin is super thick (we used maximum strength) and has somewhat of an overpowering, weird aroma. Kind of like fish oil. Maybe it’s the Zinc Oxide? It didn’t seem to really help the rash heal very quickly either. Bordeaux’s Butt Paste was super runny and didn’t seem to do much of anything for relief. Aquaphor is a Eucerin brand and claims to heal diaper rash in 6 hours. I’m not sure on the 6 hours part, but it has been the most helpful in healing diaper rash in our household. It’s similar to Vaseline and is clear. It is thick enough for its purpose and glides on smoothly. It doesn’t leave a thick, nasty residue on your fingers like Desitin.

Who doesn’t love a baby in a pair of OshKosh overalls?!!!

The “best clothes” for baby is more of just my opinion as I think most baby clothes are made with pretty good quality. Sometimes if a baby at the childcare center has on an outfit I think is super adorable, I sneak a peek at the tag to see what the brand is. Usually, the baby clothing brands I find most adorable are Carter’s brand. They have several variations of the brand, such as Carter’s just one you, child of mine, Precious Firsts, OshKosh B’gosh (joined Carter’s family in 2005) and OshKosh B’gosh genuine kids. These brands are available at stores such as Target, Kohl’s, Wal-Mart TJ Maxx, Marshall’s, etc. You can also go to their website specifically at carter’s.com. Side note-Carter’s is pretty affordable too! Also, can I just say, who doesn’t love a baby in a pair of OshKosh overalls???!!! 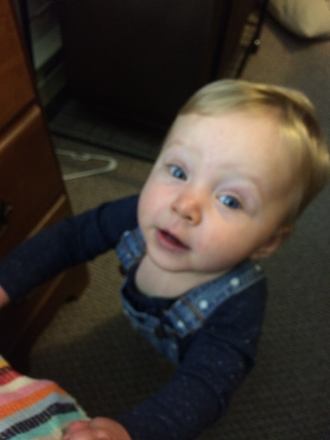 I kept seeing ads for Primary kids clothing on Facebook and thought I’d check out the website. All Primary clothing comes in primary colors with no slogans or logos. This makes it kind of nice when you are tired of seeing Minnie Mouse or a gaudy butterfly all over the baby clothing racks at the store. This brand was created by moms who were tired of just that. Pricing is a little higher compared to Walmart or Target, but worth it in my book. I’ve only ordered Taya one pair of leggings off the website, but they are super soft, stretchy, and made of thick, high quality material. It’s a good place to go if you have a cute top but no baby leggings to match-you can find them in every basic solid color. They also have pajamas, hoodies, sweat pants, and body suits.

I’m curious to know which baby products you like best?! Each parent and family is so different when it comes to what products they use. Comment below, I’d love to hear from you 🙂