I wrote this post back in June of 2017 and I am just getting around to finishing it now….on January 13th, 2018. (I just had to erase “…on New Year’s Day.”) Anyway, the following is what I wrote some months ago, which I will leave unchanged until I add in new developments in Taya’s day-to-day life since turning 2. Also hoping to add more photos later!

My daughter Taya turned 18 months on June 4, 2017. I have to say, although I sometimes get a little sad, as mothers often do, when their children show unmistakable signs of growing up, this has been my favorite stage of hers so far!

Taya has shown an intense interest in shoes over the past few months-trying them on, bringing mom and and dad their shoes to put on, trying on mommy and daddy’s shoes, and forever separating mommy’s pairs from one another in disarray somewhere around the house. She’s not real picky on the type-work boots, heels, flats, flip-flops, tennis shoes, you name it. Here little chubby feet recently went up in size and we had to peruse the aisles of Wal-mart to find her 3 new pairs that actually fit! All of a sudden, one morning, all her size 4’s were too small. She was a step sister in Cinderella-trying to cram her toes into her glass slippers, now much too crowded. Anyway, she is a proud size 5 now in most brands, to match her diaper size. 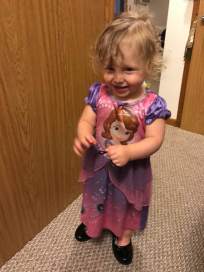 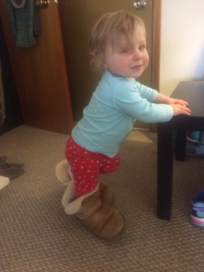 Taya has recently learned how to climb up onto our couch and chairs that sit lower to the ground, mostly without help. She’s been climbing up on her little rocking chair nana painted pink for her for months. She typically climbs to reach something (i.e. our labtop or cell phones) or because she feels she needs to play in the water at the kitchen sink. (Nana lets her do this while watching her each week, which I can tell she loves!) We just have to remind her often to “sit down” so she doesn’t bonk her nogan!

In the last few months, Taya’s vocabulary has grown immensely! Now at age 2, she repeats most things we say with accuracy. Some phrases are still said in her own unique way. For example, when she says, “I love you, ” she says, “I hover.” (Try it out-actually sounds pretty similar.) She is currently going through a phase when we read books together, where she feels compelled to ask, “What’s that?” while pointing to every single person, animal, and object on each page. Let me tell you, it makes getting through one book quite challenging and may test my patience more than I am willing to admit at times. 😉

We are starting to notice her heightened recollection of  events, movie characters, and relatives’ names as well. She went on a walk outside with her daycare class earlier this week and fell, scraping her knee. We’ve heard the remark, “I fell” as she points to her knee at least twice a day since then. It is not uncommon for her to be watching a movie and ask where specific characters have gone if they are all of a sudden not in the current scene. Just last night, while watching Frozen, her go-to was, “Where Salsa?” (Where’s Elsa?) It has been heartwarming to hear her say, “Ba-ba!” (Grandpa) when my dad or father-in-law are spending time with her.

At 2 years old, Taya has developed some pretty strong attachments to certain things including her “blankie,” baby doll, Barbies, the movie Frozen, and in the morning upon waking up-whichever parent is still sleeping or getting ready for work. She is starting to assign ownership to many items by saying, “Mommy’s”, “Daddy’s,” and “Mine.”

Taya Grace loves to dance and she is really good at it; she seems to understand that music has a beat and how to move to it. She has entertained my husband and I countless times with her booty bouncing, leg swinging, circle spinning moves. We cheer her on, which encourages her more. 🙂 She enjoys singing as well. She has her own version of Frozen’s “Let it Go” and sings Twinkle Twinkle Little Star and You Are My Sunshine with me at night before bed. This has been so precious to watch as she sings her heart out and requests to sing these songs each night. Our toddler is also learning how to pray…she has the fold your hands together, the bowing your head, and being quiet parts down. However, she doesn’t always refrain from eating when we pray before a meal. 😉

In general, Taya is a pretty easy-going child. Don’t get me wrong-she definitely has tantrums like any toddler every now and then, but currently I would say her list of dislikes is basically limited to zip-up hoodies, getting her diaper changed, and most fresh veggies. Not too shabby, Taya. 🙂

As Taya has gotten a little older, she has dabbled in coloring, playing with play dough, helping nana and dad with the dishes, and delivering folded up dirty diapers to the trash. She still enjoys baths (especially all the bubbles) and has developed a fondness for my mother-in-law’s little dog Sugar. She continues to love books-being read to and flipping through her books in her room. I’ve walked in to check on her in her room, suspecting mischief due to the silence, but have been pleasantly surprised to see her contently flipping through a book in the rocker. So sweet!